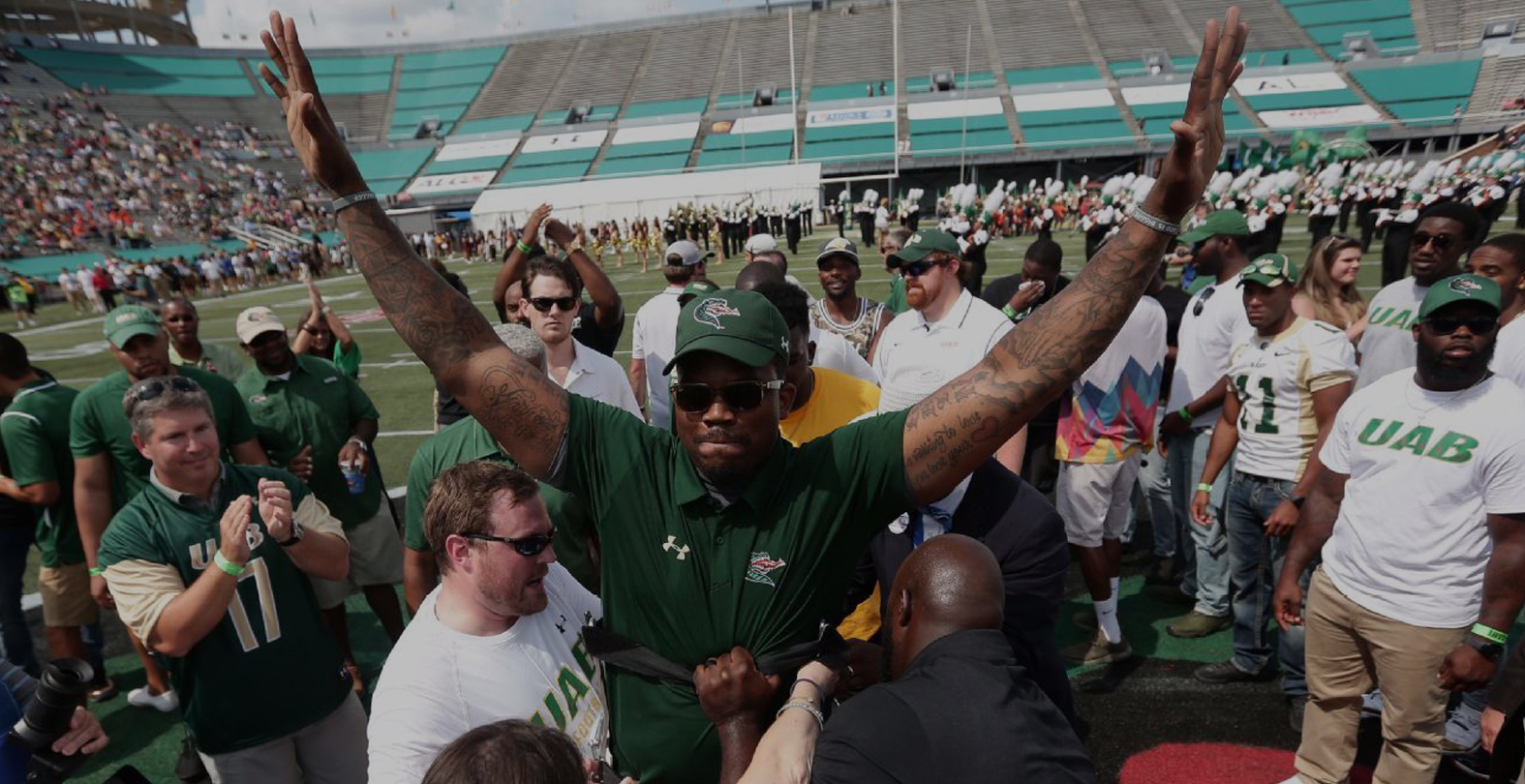 Under just about any other circumstances, the night of Sept. 2, 2017, would have found Natalie Shannon in Atlanta for a neutral-site college football game between her beloved Alabama Crimson Tide and Florida State.

But Natalie, Drayer center manager in Trussville, Ala., had an even more important football game to attend that night in her native Birmingham, Ala.

Her friend and long-time Trussville patient Tim Alexander had vowed to walk out of the stadium tunnel with the reborn football team at the University of Alabama at Birmingham.

“It’s going to be that special a moment that I don’t feel I can miss that,” Natalie said in anticipation of the game.

After all, Tim had been paralyzed since a car accident in 2006.

‘I have a patient for you’

Tim’s dream may have sounded incredible, but it was consistent with a whole series of unlikely events that had brought him and Natalie together in September 2015. One evening, Natalie was finishing at the center prior to attending the Center Point vs. Parker high school homecoming football game when she received a text from her mother.

“I have a patient for you,” her mother wrote. She had just watched the tail-end of a television news story about Tim and how he didn’t think his insurance would cover the physical therapy he needed. The story noted that Tim had played football at Erwin High School — now Center Point.

Once she got to the school, Natalie searched for Tim on Facebook. His profile popped up immediately because they had several friends in common. She sent him a message, explaining that she was a physical therapist for Drayer and wanted to discuss how the company could help him. Tim responded immediately that he was going to be at the game.

“This is when the work of the Lord started to become evident,” Natalie said.

While Natalie was setting up the tent, relating this story to a Drayer colleague, Tim rolled by in his wheelchair. She immediately approached him; he gave her a hug.

STANDING ON HIS OWN

Within a week, Tim had a prescription to resume physical therapy for the first time since 2009. He has been a Drayer patient ever since, always self-motivated and encouraging other patients, Natalie said.

The original focus of his PT was on increasing core strength so he could sit up and hold his balance. He made great strides, progressing to using a standing chair. In July 2016, he posted a video to his Instagram account with this caption:

“After 10 years of never giving up and keeping the faith I’m FINALLY able to STAND ON MY OWN! 10 yrs AND STILL believing THAT I WILL WALK AGAIN!”

He thanked Natalie and Drayer for their help. Later that same week, he stood without assistance again, if ever so briefly, as a TV news camera captured the moment.

Meanwhile, Tim continued to pursue other passions. He earned two bachelor’s degrees and a master’s degree from UAB. He worked tirelessly on behalf of the school’s football program, which had been eliminated for budgetary reasons after the 2014 season only to be reinstated in fall 2017.

Which brings us back to Sept. 2, 2017, when UAB played host to Alabama A&M in its season opener. Tim was determined to lead the UAB Blazers squad out of the tunnel and onto the field.

“Whether it’s walking with a walker, or the RGOs (reciprocating gait orthosis) — I call them the Forrest Gump braces — whatever it is, I’m not coming out of that tunnel in a wheelchair, I know that,” he said.

The pre-game played out with members of UAB’s 2014 team – Tim was an honorary member– lined up and handing the game ball to one another from the tunnel onto the field.

The line ended with Tim, whose championing of the football program was considered a significant factor in its revival.

Helped up from his wheelchair but mostly using his own core strength, Tim took nearly 30 steps toward midfield. With the game ball now in his right hand, he raised both arms triumphantly to cheers from the teary-eyed crowd at Legion Field. That moment garnered national attention, including on ESPN’s “SportsCenter.”

Natalie was with Tim for every step, guiding his feet forward. Two men provided support: one of them was Scott Cooley, former Drayer center manager in Cullman, Ala., who stood on Tim’s right.

“He was definitely really excited,” Natalie said of Tim. “I think it took some time to take it all in,” both his personal achievement and football’s return.

Tim, who married in May 2018, travels extensively giving motivational talks and serves as UAB football’s director of character development. He continues to come to Drayer’s Trussville center as his schedule allows.

“He definitely has the drive to do whatever he wants to do,” Natalie said. “For him, more things are possible than clinically what should be possible.”